I’ve seen my new oncologist twice now.  I like him but it’s definitely different.  I don’t feel “connected”.  Dr. W. and I had some good chats.  We had a history.  I have no history with this Dr.  I guess we will build some as we go–unless I decide to switch and go see my old onc at his new office.  It would be cheaper since he is in my employer’s network and my co-pay is less if I go to a provider there.

My last round of blood work had my CgA the same (normal) and my pancreastatin went down to 146 (still above normal but lower than last time).  Everything else looks great!  I’m having a CT Scan in July (20th) and then I see him the following week.  He did say he’d put me back to yearly scans if all looks good.  I’m not expecting anything different.

Changes… my sister has retired early and moved to California to help take care of her grandson who lives with his dad.  Dad works a ton and can’t do it on his own.  I’ve lived with my sister since I left my husband.  It wasn’t supposed to be for this long but….  this means I have to move.  I have until the end of October (for now) as her daughter wants to buy her townhouse but is in a lease until Nov. 1st.  It could all change between now and then.  The biggest problem for me is money.  I’ve been paying her rent but not nearly as much as if I lived on my own.  Rent is pretty pricey here.  What this really means is that I have to sell my horse, Abbie.  It really breaks my heart.  I just can’t afford her, rent and all that goes with it.  I’ve had a few people come and ride her but nothing has worked out yet.  The most important thing is that she goes to a fantastic home!  I don’t care about the sale price, I would give her to someone I knew would take the best care of her. At least I have some time to find just the right home.  She’s not young.  She’s 16.  It’s harder to re-home the holder horse who may only have a few years left of the rigors of competition or even daily work.  She’s really fit but has a few joint issues like most horses over 12 or so. 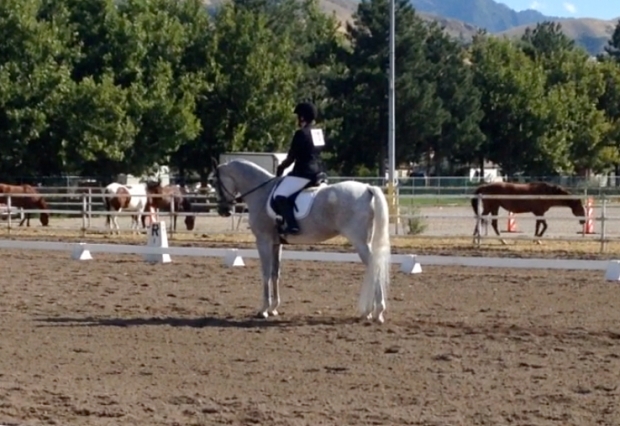 Above is Abbie and my trainer at the one and only Dressage show we went to.

On a sad note, we’ve lost two members of our support group in a month.  Another lady I knew through my blog passed yesterday.  It happened so fast.  She was a PNET.  She’s been doing pretty good, several treatments and recently had SirSpheres.  She started having some pain and then she was in the hospital with fluid build-up. Next thing I heard  she was being sent home on hospice.  She died two days later.  I felt connected to her through our mutual love of horses.  She recently had lost her mare Ophelia to old age.  I hope they are reunited and galloping through the fields!